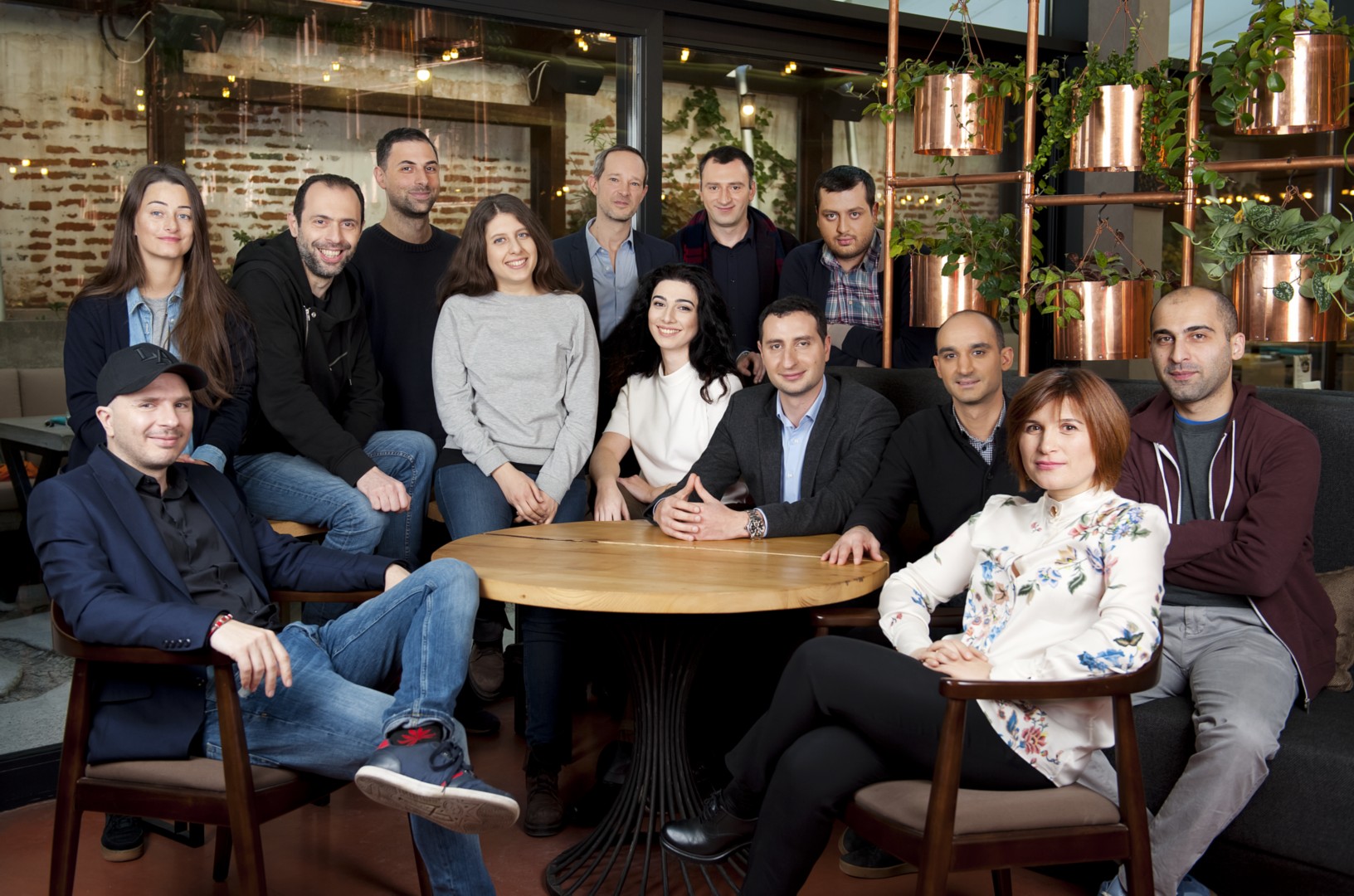 t has been over a year now that the Georgian film industry has come into focus of a cluster development initiative launched in Georgia with the support of the European Union. The Georgian Film Cluster is now an officially registered entity that brings together leading professionals in film production and post-production, who share a common vision for promotion of the Georgian film industry. The cluster members join forces in boosting international linkages and advancing the interests of the industry locally and internationally.

Georgia has much to offer to international filmmakers.  The history of Georgian film dates back to the early 1900s. The first full-length documentary was produced in 1912, while first film productions started even earlier, in 1908, the year that officially marks the birth of Georgian cinema. Besides its vibrant, deeply-rooted cinematic culture, Georgia is an attractive filming destination for both domestic and international productions due to its breathtaking landscape and climate diversity. The Government-backed industry incentives and low level of bureaucracy ultimately provide great benefits to international productions.

The Georgian Film Cluster seeks to spread the word about the opportunities that the industry offers. By focusing on the country’s main competitive advantages, the Cluster makes a case for Georgia as a film-friendly country. “Production crews generally get an easy access to any location and are not burdened by special regulations. Local authorities are also supportive. The Cluster will help us spread this information more widely, including at the international film markets,” says Valerian Kirkitadze, a member of the Cluster and a head of the production company Film Asylum.

The EU co-financed project that acquainted Georgian filmmakers with the cluster development methodology is run by GIZ, Germany’s leading service provider in the field of international cooperation for sustainable development. With financial support from the EU and under the EU4Business Initiative, GIZ is now applying business clustering, as a trademark initiative, to support Georgian SMEs. This particular undertaking with the Georgian Film Cluster was preceded by a comprehensive assessment of the film production and post-production industry. It revealed significant opportunities for growth and expansion and proved there was a potential for cluster development. Clustering provides an opportunity for Georgian filmmakers to expand their reach to European and international film markets and boosts their internationalization.

Vladimer Katcharava is a well-known producer and founder of 20 Steps Productions, a Georgia-based independent film production company. The company’s credits include such internationally acclaimed films as Hostages, Dede and Eva Husson’s Girls of the Sun - a Georgian co-production with France, Belgium and Switzerland, which will compete for Palme d'Or this year in Cannes. Interestingly, the co-production deal on the Girls of the Sunwas successfully negotiated by 20 Steps Production representatives at the last year’s Marché du Film in Cannes, which they attended with support of the EU-GIZ project.

Husson was inspired to make the film – which follows a Kurdish female battalion known as ‘The Girls of the Sun’ – after reading about the exploits of real-life Kurdish women taken hostage by Islamic State fighters as they swept across Syria and Iraq, but who managed to escape and then took up arms against their former captors. The film was shot in Georgia and France last September and October.

Katcharava believes that the Georgian Film Cluster has the potential to increase foreign film production and post-production services in Georgia. It can raise the industry’s visibility at the international film markets, which is key to attracting international productions.

“Georgia’s film industry is already established. When foreign producers see what Georgia offers, be it a diverse landscape or various creative products, they expect that the country can also provide for   professional production and post-production services,” he says.

Tinatin Babakishvili, a projects manager at Post Red Audio, is confident that the affordability of post-production services as well as the quality of the work will attract foreign filmmakers.  Post Red Audio works on audio post-production services for films and boasts among its credits The Trader, a short documentary by a young Georgian filmmaker Tamta Gabrichidze.  The film recently won the Short Film Jury Award for Nonfiction at the prestigious Sundance Film Festival in the United States. It has been selected by the global streaming platform Netflix, making it available to an audience of over 100 million viewers across the world.

A joint project of 20 Steps Productions and Post Red Audio is a new animation film, Fisherman and the Girl, which is selected in the main competition of the prestigious Annecy International Animated Film Festival 2018 taking place in June.

Paata Godziashvili, Director of the sound mix company Studio Phonographi, notes that the foreign film producer needs creative, professional, financial and technical resources when shooting a film, and Georgia has all of these. “But there are unconditional advantages that Georgia possesses, these are diversity of climate and low price. What we definitely need for attracting foreign film producers’ interest is international linkages,” he says.

The Georgian Film Cluster unites 33 leading companies and professionals in the audio-visual industry in Georgia. Its membership structure provides for principal, associated and honorary members, as well as institutional members. Its principal members are professionals with at least five years of industry experience.

A diverse membership base enables the Cluster to offer its clients a full range of services – these are a customized, integrated suite of production and post-production services or standalone services at any stage of the production process. The main activities of the Cluster have been identified as private-public dialogue, skills development and internationalization.

The Georgian Film Cluster plans to serve as a unified voice for the industry’s interests. It will elaborate policy and regulatory initiatives covering such issues as taxation, co-production contracts, copyright, and intellectual property. The Cluster has already proposed necessary changes to Georgia’s Tax Code, which have been presented to the office of the Business Ombudsman, which supervises protection of rights and legitimate interests of persons related to entrepreneurial activities performed on Georgian territory.  The package of amendments is now referred to the Ministry of Finance with a positive recommendation from the Business Ombudsman.

With the support from the EU-GIZ project, the cluster members have already taken advantage of the training opportunities at a leading European training institution – 4 members have participated in a programme offered by the Erich Pommer Institut, an internationally recognised provider of advance training in media law and management.

Most importantly, Cluster members are supported through sharing the costs of participation in international industry events, particularly film markets, which is a crucial element for promotion of the Georgian film industry. The Cluster Manager and GIZ Consultant Mari Khokhlenko Caltrider notes that since the establishment of the Cluster, members have launched negotiations with several foreign productions. In total, more than 5 contracts on production and co-production services were signed.

The Cluster plans to extensively use its platform for public-private dialogue. A proposal for introduction of changes to the existing tax legislation has been already put forward.  Furthermore, the Georgian Film Cluster wants to convince the government to incorporate a specific provision on a cash rebate into the Tax Code. The current cash rebate scheme is part of the ‘Film in Georgia’ programme that was launched in 2016. The programme offers a 20% cash rebate of qualified expenses with an additional rebate of 2-5%, based on the promotional value of the production.

“By putting the cash rebate scheme into legislation, we will ensure that this incentive is sustainable and lasting,” argues Babakishvili.

The Cluster also suggests that the government introduces a separate cash rebate scheme for post-production services.

‘Film in Georgia’ has already brought tangible results. In 2017, 10 international productions were shot entirely or partially in Georgia under the programme, of which 4 are Indian feature films, 5 are Georgian/European co-productions, and one is a US production. The total investments on the programme amounted to more than 26 million GEL, or €9 million.

“The Cluster’s goal is to increase awareness of how creative industries, and particularly, the film industry, can benefit the Georgian economy. To this end, we will use a format of direct dialogue with government as well as a broader PPD platform. We will sponsor introduction and passage of relevant amendments to the Georgian tax code to provide a favorable framework for strengthening and promoting the Georgian film industry,” says Noshre Chkhaidze, film producer at GFM Studio, and a co-founder of the Georgian Film Cluster.

EU4Business is an EU initiative bringing together all EU programmes assisting SME and private sector development in Georgia.  It enables the private sector to take advantage of the opportunities offered by the EU Deep and Comprehensive Free Trade Agreement which gives Georgia access to a common market of 500 million consumers.