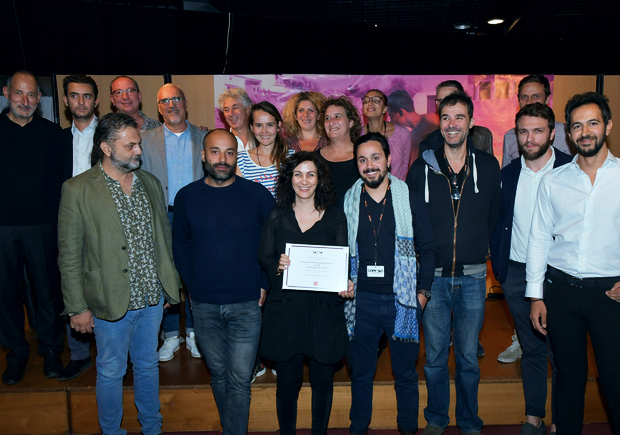 After two days of pitching, the jury for the 28th edition of the Development Support Grant, handed out as an integral part of the 40th Montpellier Mediterranean Film Festival, chose to award the project Mediterranean Fever by Maha Haj, an Israeli-based Palestinian filmmaker who turned heads with her feature debut, Personal Affairs [+], at Cannes in 2016, in Un Certain Regard. Written by the director herself, the story of her sophomore film revolves around a 40-year-old Palestinian man from Haifa who is trying to become a writer. But he is unhappy in his relationship with his partner, has children and has fallen into a deep depression, so he makes friends with his neighbour and gradually convinces him to help him commit suicide in a way that will make it look like a death from natural causes… Production duties will be handled by Baher Agbariya for Majdal Films, while French outfit Still Moving recently boarded the project as a co-producer.

(The article continues below - Commercial information)

Handed out by a jury chaired by Georges Goldenstern (director of the Cannes Film Festival’s Cinéfondation), aided by director-screenwriter Baya Kasmi, producer Dominique Welinski (DW Production), and her counterparts Cedomir Kolar (ASAP Films) and Nadim Cheikhrouha (Tanit Films), this €8,000 development support grant is provided by the CNC and comes in addition to €5,000 in image post-production services at Anaphi Studio.

The second grant, worth €4,000 and provided by the Occitanie region (plus €5,000 in technical post-production services at French Kiss Studio) went to Carnaval (Sang et Miel) by Egypt’s M. Siam, the first fictional project by the filmmaker, who made a splash with his documentaries Whose Country? [+] and Amal [+]. Produced by Guillaume De Seille (read the interview) for Paris-based outfit Arizona Productions, the movie will centre on a police officer suffering from post-traumatic stress disorder who has to look after the 12-year-old daughter of another officer who is kidnapped in Cairo in 2011, just before the revolution.

The jury also singled out Domina Maris, the feature-debut project by Silvia Perra, which won the Arte Kino International Award at the MIA in Rome earlier this week (see the news), and is being produced by Luca Cabriolu for Italian outfit Ombre Rosse Film Production and Sandra da Fonseca (read the interview) for Parisian firm Blue Monday Productions. It has now won a residency at the Moulin d’Andé Film Writing Centre and €2,500 in post-production services provided by Titra Film. Lastly, the project De Facto by Palestinian director Rakan Mayasi (produced by The Groundglass 235) pocketed a residency offered by Greece’s Mediterranean Film Institute. Interestingly, the jury awarded a Special Mention to the project Sème le vent by Italy’s Danilo Caputo (produced by Marianne Dumoulin and Jacques Bidou for Paris-based company JBA Production together with Italy’s Okta Film).

Meanwhile, the jury of the fourth edition of the "From Short to Long" programme (open to those filmmakers taking part in the short-film competition who wish to start working on a feature-length project) handed out two writing residencies at the Moulin d'Andé (financed thanks to support from the SACD) to the projects Panopticon by Georgia’s George Sikharulidze (produced by 20 Steps Production) and Qarin (Kin) by Lebanon’s Fadi Baki, with a Special Mention going to À Corps perdu by France’s Jan Sitta and an “Encouraging Mention” bestowed upon Women’s Drive by Israel’s Alma Hemmo and Shauly Melamed (staged by Lama Films).

"From Short to Long" programme